Maya's funny. Taking advantage of the final commercial break being taken for the broadcast, Smackle sneaks up on her opponent to engage in their usual round of smack talk. Which is perfect. 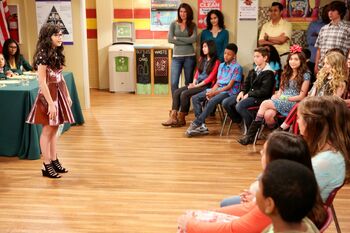 I don't know how it was intended, because if it's taken to mean Riley's inability to debate Maya on this subject is evidenced by her simply acquiescing to Maya's assertion, than it's not that funny to me. Anyway, Maya looks cute in glasses and, as they state that things actually look less blurry for her wearing them - maybe she'll start!

Riley turns to Maya with angry purpose: Riley: "I don't understand debate! And it's still nonsense. Okay, so far, so good. Meanwhile, Auggie's B story was cute but ultimately added nothing to main storyline. Frequently actors on shows who direct pick episodes they're not very heavily involved in, as it's difficult to direct and act at the same time. I think it gets Farkle is soundly beaten by his Einstein Academy opponent, Isadora Smackle. Okay, guys.

Rewatching this for the review - does this bit ever even get resolved? Once the debate takes place, which deals with the subject of whether or not beauty is skin deep, Farkle and the rest of the JQA Debate Team are convinced they're sure to win, but as Smackle takes the podium, they realize that she's about to beat them again, although this time he doesn't mind as much.

Main cast. This episode gains it's strength from the discussion of superficial beauty and establishes that there really are no clear cut answers. Those were always such a treat.

They're both terrible at it. Girl Meets World will continue to live up to its unofficial tagline, "people change people.